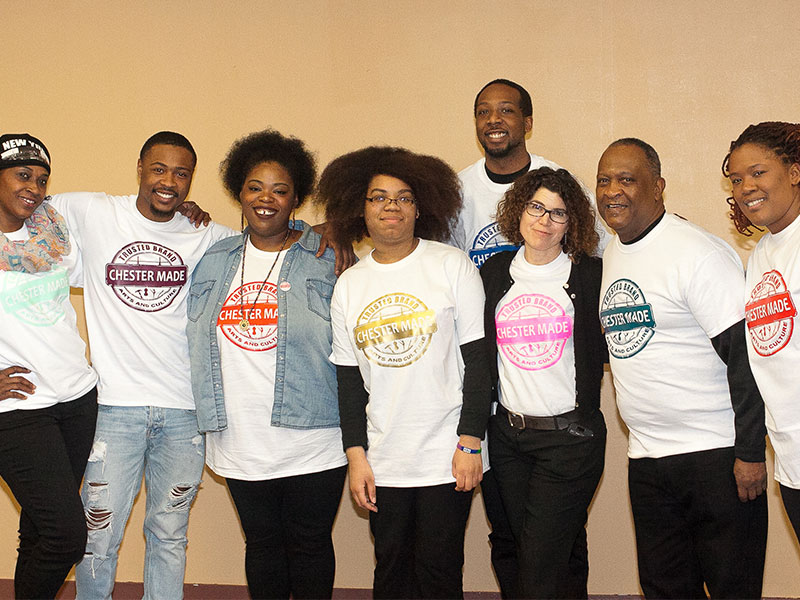 Creating a new cultural corridor in Chester, Pennsylvania takes some construction work, or at least ambitious renovations. The first step in the process of revitalization is not to frame buildings, but a narrative—a story of the arts and culture and their place in the life of this city. It’s this evolving story that will guide the progress to come.

With leadership from the Pennsylvania Humanities Council, the City of Chester, Widener University, Chester Arts Alive!, Just Act!, The Artist Warehouse, and Americans for the Arts, collaborators of many kinds worked to write this story—or actually to transcribe it. The authors are the people of Chester themselves.

In 2015, through a process called story-gathering, the ten-member Chester Made Ensemble met with Chester residents, asking careful questions, and listening to what their fellow community members had to say. 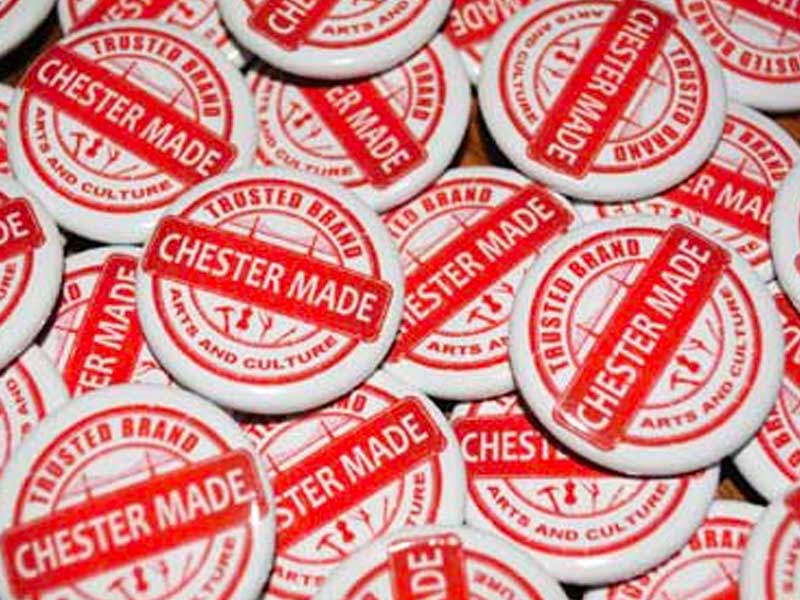 Some of their stories capture highlight moments:

A woman tells of visiting a club where James Brown performed live to a thrilled audience. Decades later, her memory remains vivid of a once-thriving music scene.

Others describe an ongoing involvement in creation and expression:

A young woman grows up singing Gospel music in her church choir, hearing concerts in the park, and performing plays in school. She remembers the arts as a life-saving force—a weapon against sadness in times of family trouble.

Residents shared their stories in groups called story circles or through story interviews, led by members of the Chester Made Ensemble, who have been trained as facilitators. Participants—from school kids to senior citizens—gathered in a church or library, at the Boys and Girls Club, or at City Hall. A session might have involved 30 people, five circles of six, or a series of one-on-one exchanges.

The facilitator led with a question, for example, “Tell us about a significant experience of arts, culture, and creativity in your life.” Then, in turn, each member of the circle had the chance to speak.

Lisa Jo Epstein, Executive Director of Just Act!, is a theater innovator, director, and educator who helped plan the project and was responsible for training Ensemble members along with Don Newton, a local resident and member of Chester Arts Alive! Epstein explains two key features of this story-based approach. “The stories were timed at two minutes,” she says. “Each person had the same amount of time, so all their stories would be given equal weight and value. 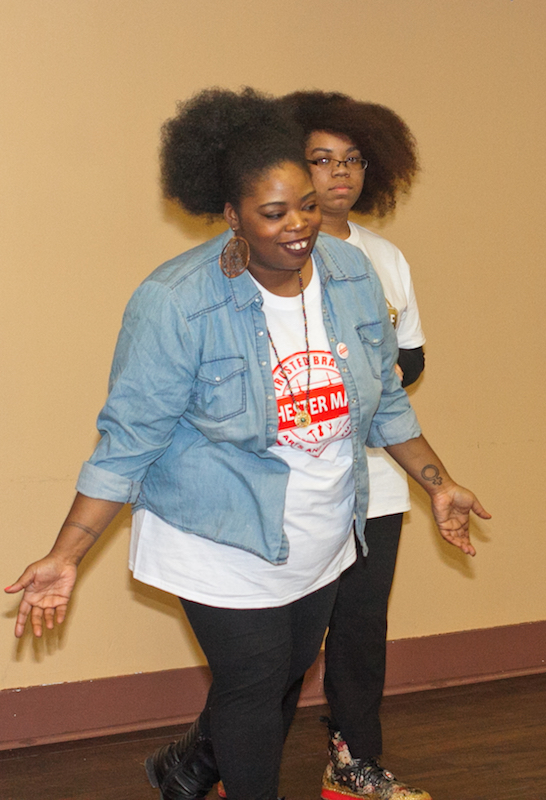 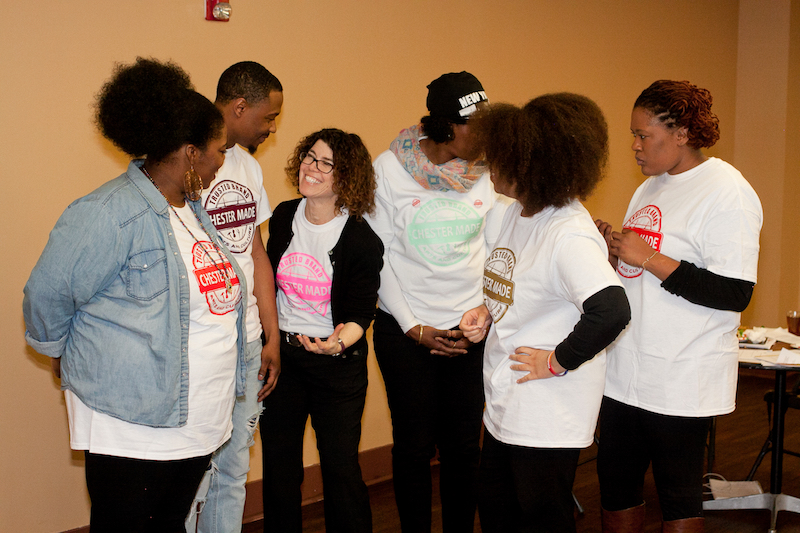 Epstein points out how unusual it is to have the chance to share a story of personal importance, with a rapt audience, and without others interjecting. “We wanted to be sure that every person was heard and all stories honored,” she says. A highlight of the sessions were the “gift-backs” when members of the Chester Made Ensemble took a story they heard and brought it spontaneously to life in an act of instant, improvised theater.

Newton notes the power of residents’ stories. “People remember a time that was, describe their city today, and express their hopes for the future. The idea that their views and values will help shape the city’s plans is extremely important.”

A child is dropped at a summer day camp. She’s unhappy, not fitting in. She wanders away, through the park into the museum nearby and experiences an epiphany. Encountering the art on the walls, her eyes and mind open. She feels she can breathe freely.

Many of the stories are tinged with loss:

After the demolition of Deshong Mansion, a magnificent local landmark, a city worker helps carry away slabs of marble, wrought iron, and old flower pots. She feels a moving sense of “touching history,” contact with pieces of her city’s physical past that stood before her grandparents’ time.

The goal of the story-gathering was to gain an understanding of the power and value of the arts and culture in the lives of the people of Chester, to give voice to their aspirations, and to lay the foundation for future plans.

“As the city makes plans for future arts initiatives, the stories of Chester’s residents need to be central in the process, not an afterthought,” says Epstein.

Newton, a life-long resident of Chester, agrees: “Community participation is key. The people of Chester know their voices are being heard, and for too long, they did not feel that way.”

“Story-gathering is a powerful tool in community engagement and revitalization,” says PHC executive director Laurie Zierer. “In fact, we’re only beginning to see its full potential.” She adds that through a recent partnership with the Orton Family Foundation, PHC will be offering training sessions to community leaders across Pennsylvania in a highly effective story-based community engagement model developed by Orton called Community Heart and Soul. “This is a wonderful chance to spread this approach to many more Pennsylvania towns and cities,” she notes. 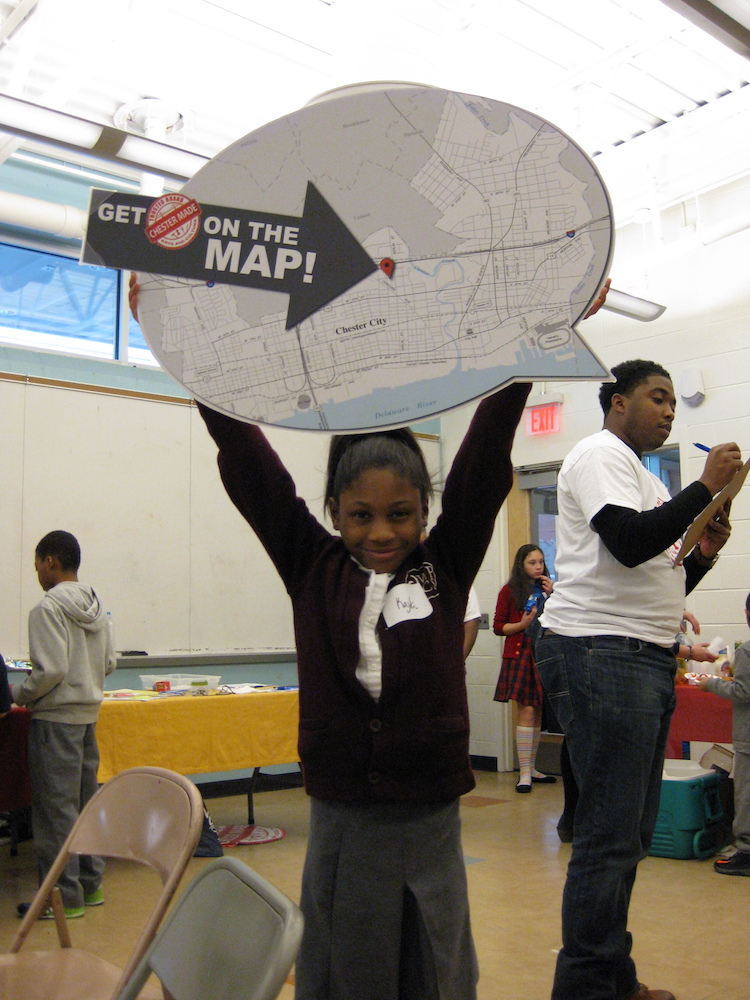 In Chester, several weeks of story-gathering revealed a remarkable variety of experiences and perspectives. A striking number, though, share a common thread: a note of aspiration, a desire for a renewed richness of arts and culture:

In their youth, a twin brother and sister take music classes at Frederick Douglass Junior High School. He goes on to study at the Curtis Institute in Philadelphia and to tour the world as an opera singer. She stays in Chester and sees her city change. She ends her story by describing a fierce desire for greater possibilities to open to the young people in her community today.

Major support of the Chester Cultural Corridor has been provided by The Pew Center for Arts & Heritage, with additional support from PECO and the National Endowment for the Humanities.

Back to Chester Made Begins